Many of you may have seen the movie The Soloist. Here is a recent shot of Nathaniel Ayres at a birthday party hosted by Steve Lopez (the man who wrote the story) where a new guitar was presented from the folks at Union Rescue Mission. Yes, he also now plays guitar. 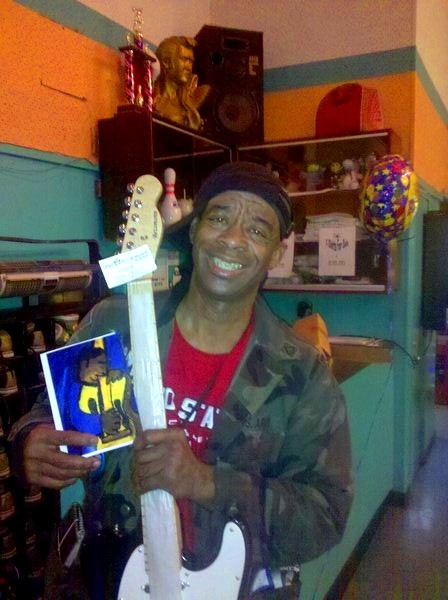 You have seen Mr. Ayres as depicted in the movie by Jamie Foxx.  Here is the actual Nathaniel Ayres.

Below is a 60 Minutes segment that shows a little more about both Nathaniel Ayres and Steve Lopez. The movie was an accurate depiction from my own personal point of view in many ways. The majority of the movie was shot in Los Angeles in the heart of skid row. There were many aspects of the movie that are missed by people that do not know the area. One of these is a scene in the movie where Nathaniel Ayres and Steve Lopez run with a filled shopping cart from the LAMP center to Disney Hall. Most people may think that this is a simple film edit cut from one scene location to another. In reality the run between these two places with a shopping cart is well within reason as these two diverse places are less than a ten minute walk from each other.

I took this photo sometime last month of LAMP. This spot is featured in the movie "The Soloist". Here is a typical shot during the day when there are no movie crews or reporters in the area.
Posted by myles111us at Sunday, January 31, 2010 No comments: