Today Stubb's Bar-B-Q sauces and marinades (http://www.stubbsbbq.com/ ) came to Union Rescue Mission and put on one heck of a lunch for 1,000 folks.
These Stubb's folks are the real deal.  On the back of a business card there is information on a program they run called "Feed the World".   On their website they have an area that talks about this.  The link is:
http://www.stubbsbbq.com/ftw_help.php
I talked with a number of their crew that came in from Texas including their President Kurt Koegler.  Terrific folks.  They brought everything; all the food, supplies, cooked it all and served it themselves as well.  Talk about a turn key BBQ meal!
Alex Cornejo, the head man of the Volunteer arm of http://www.urm.org/ gave me a little insight as to what was going to happen in a small audio clip.  http://guitaramplifierblueprinting.com/audio/alex101310.wma
I will post a few cell phone shots of the activity today.  Next time I go down to http://www.urm.org/ I will bring one of my better cameras to augment my cell phone camera.
Some of these shots are from Andy Bales, the CEO of Union Rescue Mission.  I will note his shots with a bit of commentary. 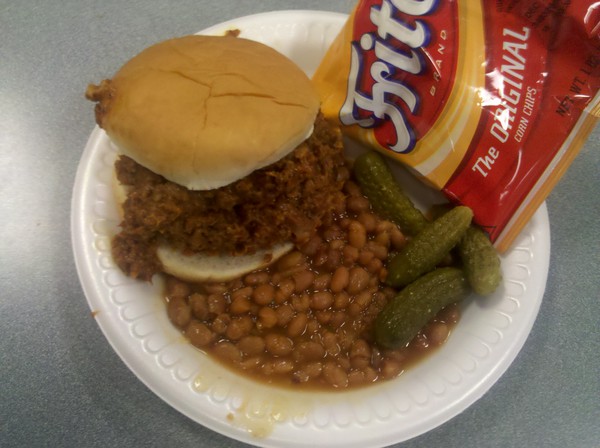 The above shot was from Andy Bales.  He and I often swap food shots on twitter or facebook.  Andy is @abales on twitter if you wish to find the guy or attempt to keep up with the man. 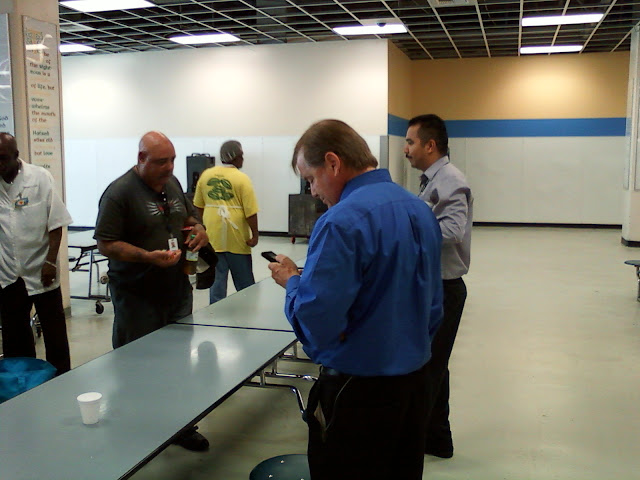 One of my shots of Andy Bales in the blue shirt.  The man never stops.  He ate his lunch in under three minutes and jumped on his phone to answer emails, send info out to many folks and attend to the business of the day.
When one talks BBQ one thinks of meat.  My task started with pickles. 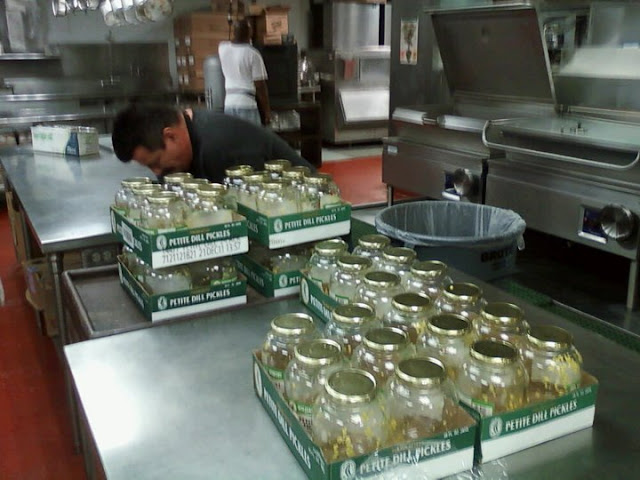 This is less than 1/3 of the pickle jars we emptied into serving trays to serve lunch for over 1,000 folks. I opened most of the jars with my bare hands. I was glad there were not too many more jars than what was on hand.
﻿ 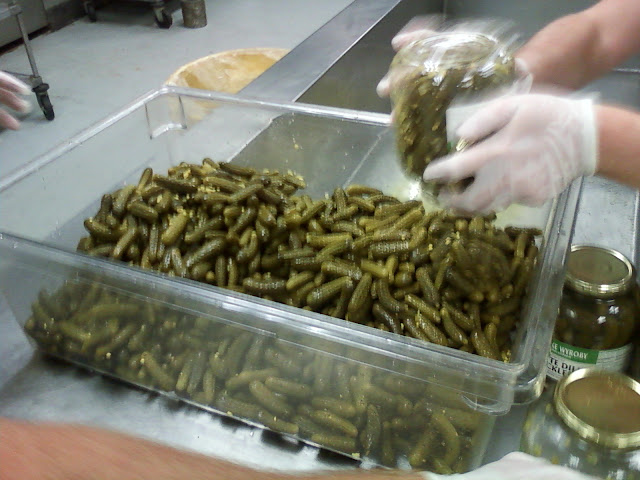 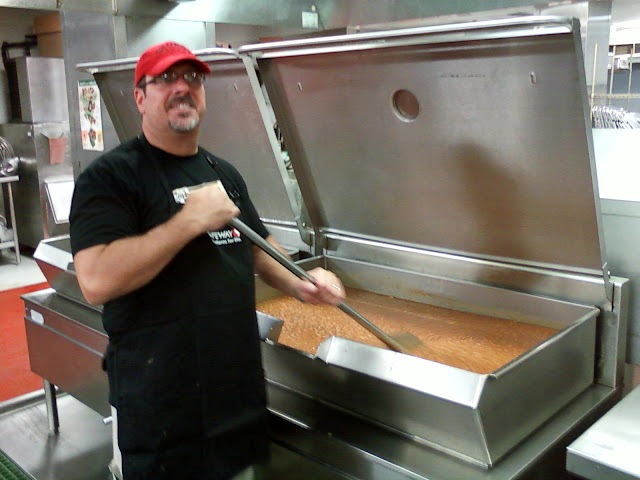 Other folks had different tasks such as BBQ beans for 1,000 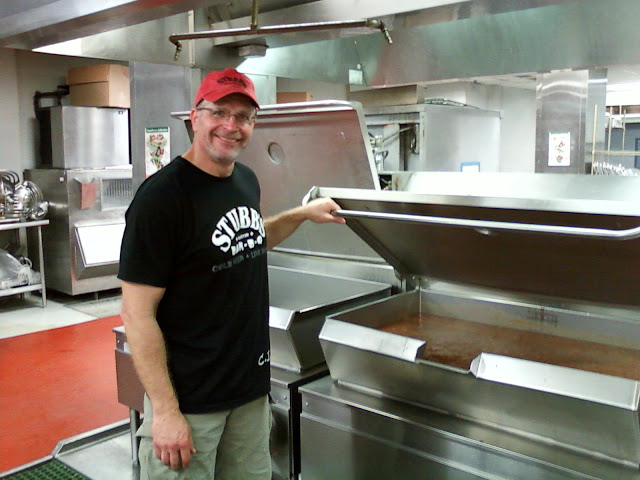 Here is the guy that made it happen, the President of Stubb's Bar-B-Q Kurt Koegler.  He brought his crew to Los Angeles from Austin Texas.
Make no mistake.  This trip to Los Angeles was anything but a one shot deal.  They have done a bit of this before and have more to do in the future.  Their "tour" schedule is just as agressive as any of the artists I work with AND what they do seems to be a lot more work than a typical set at a typical concert.  Like I said, they supplied it all from plates to drinks, prepared, cooked and served.
Their tour can be seen at http://www.stubbsbbq.com/ftw_tour_schedule.php 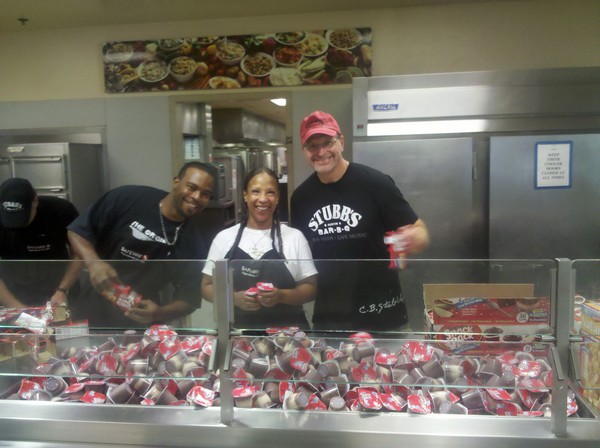 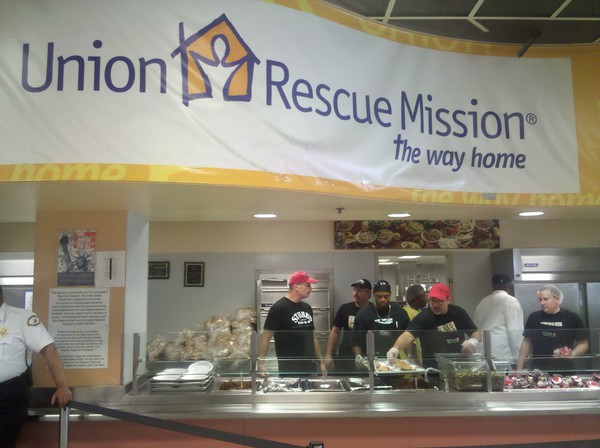 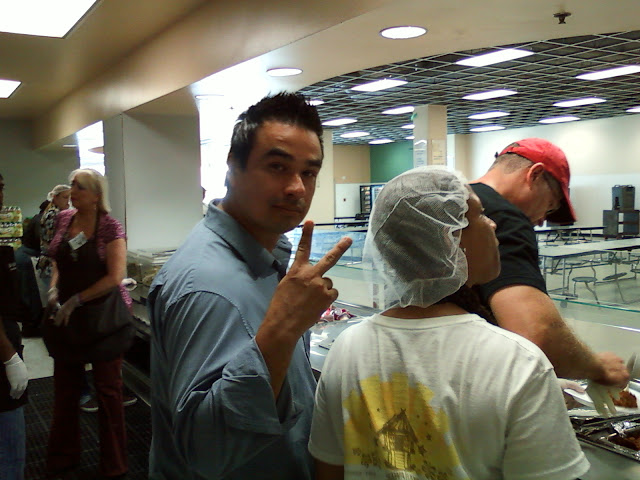 Alex Cornejo - the head man of the Volunteer arm of http://www.urm.org/ getting ready for a great lunch. 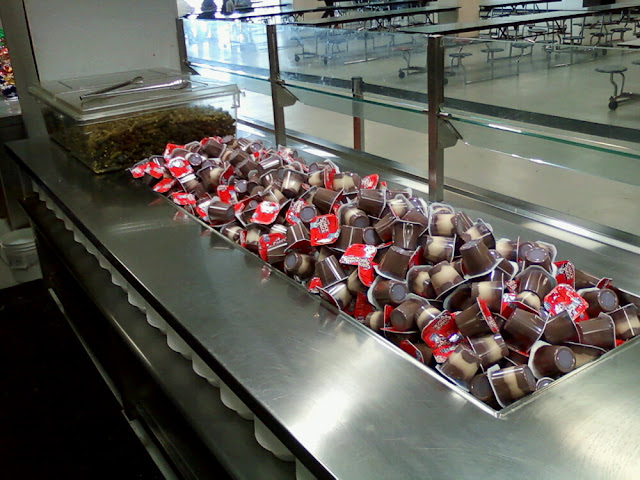 Pudding for 1,000 - just the start of the pudding stock on hand. 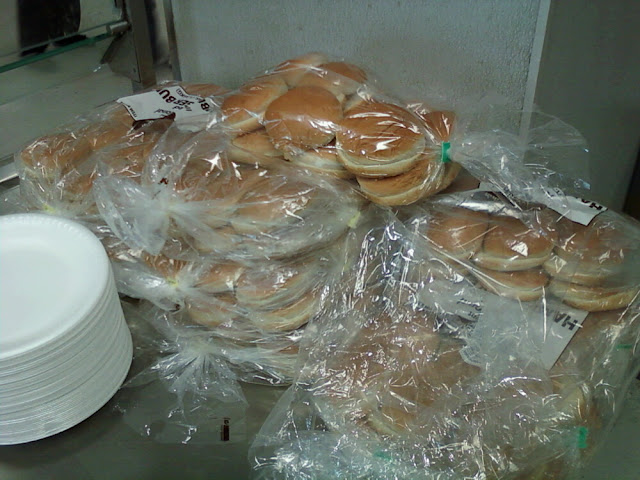 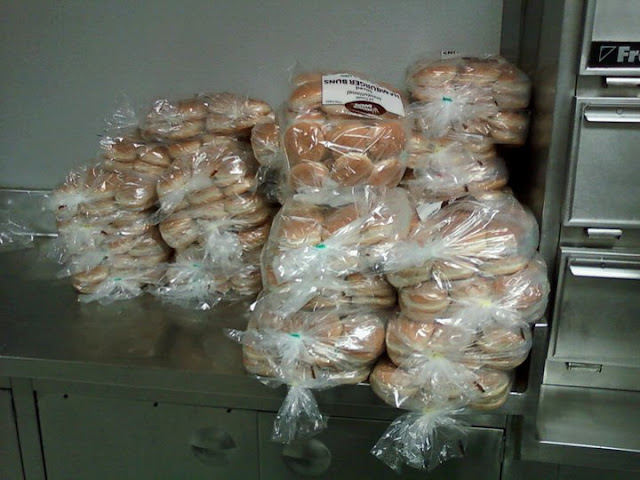 Buns for the first few sandwiches.  There were mountains of buns. 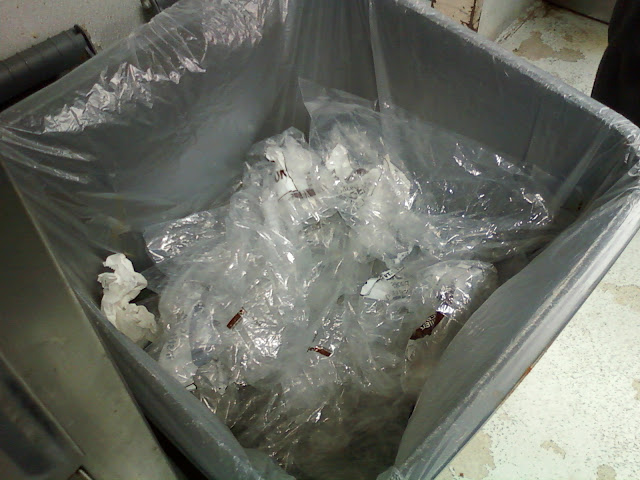 The cellophane bags the buns came in when empty quickly filled an industrial trashcan.  This was about fifteen minutes into the first lunch shift. 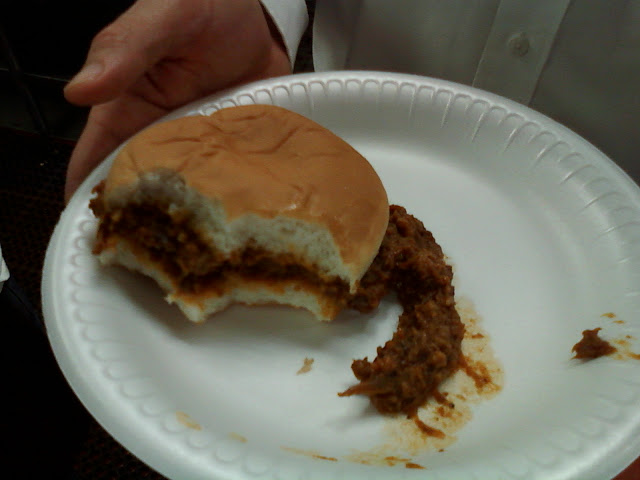 Somebody had to try the first sandwich.  This task was Andy Olivas? (not sure of the last name or spelling).  Andy works with Alex Cornejo in the Volunteer Division at http://www.urm.org/.  If you want to volunteer drop Alex note or hit the page at http://www.urm.org/get-involved/volunteer-center/  You can also find Alex on twitter at @urmvolunteers 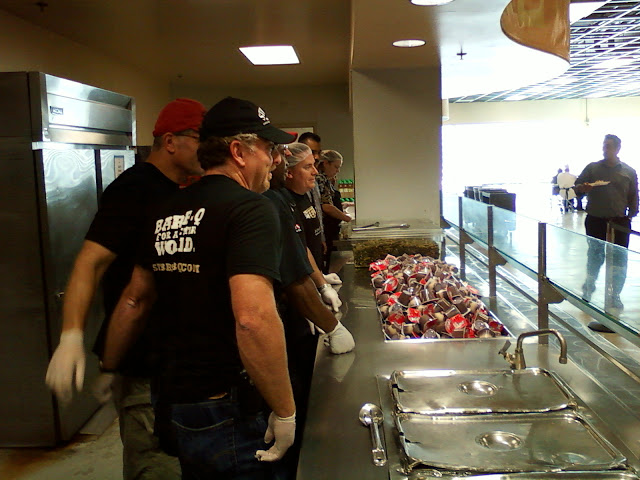 Some folks took front scene shots.  I took this behind the scenes shot. 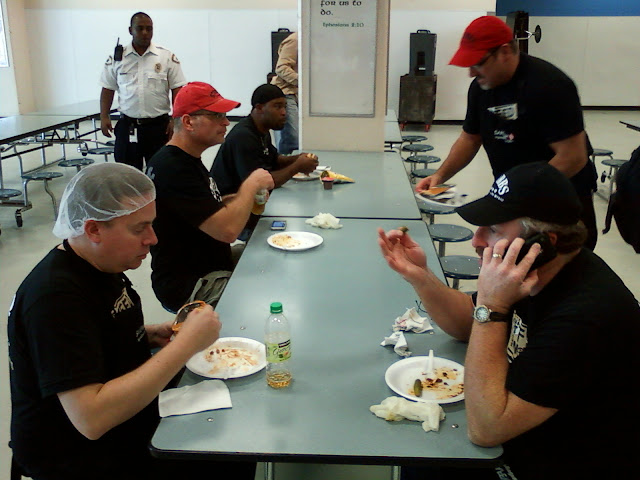 At the end of the first shift of lunch the folks from Stubb's took a few moments to eat themselves before the next wave of people came into the dining area.
The shots below are from the folks at Stubb's Bar-B-Q.  They were copied from their facebook page and show a different perspective than my own shots above. 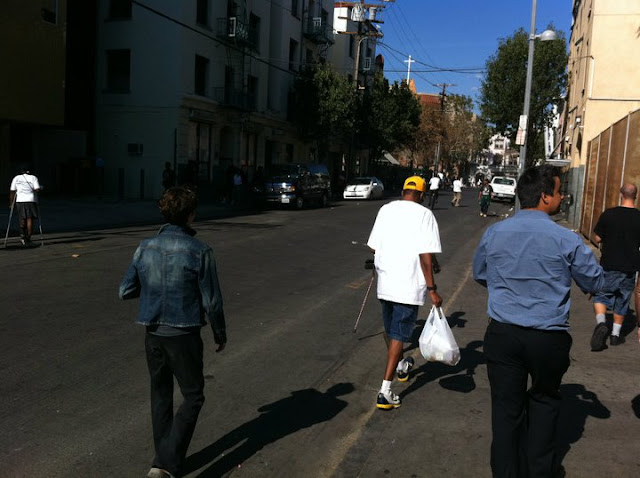 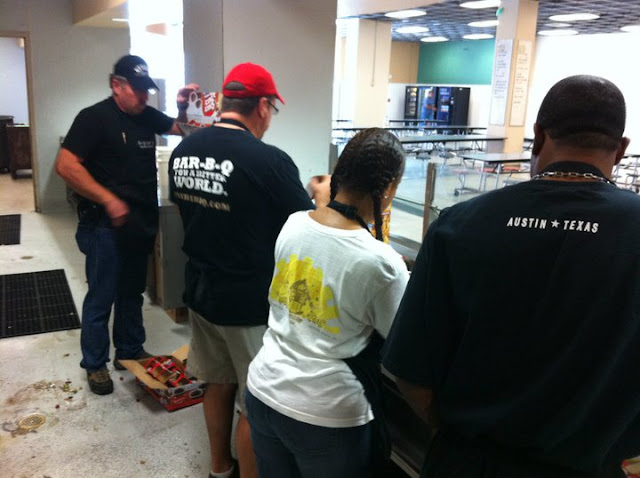 Side note - Jennifer in the center of the above photo showed me the ropes today.
There is even more .....
Read more »
Posted by myles111us at Wednesday, October 13, 2010 1 comment: