Welcome to the Recovery - sent to me by a good friend

The FULL stats totally support what you've been saying all along..

The information below was sent to me by a good friend.  Below are some of his thoughts on what Mr. Geithner had to say:

The title sort of says it all, but just by skimming over it my immediate conclusion is that Mr. Geithner is either outright insane or a total liar. Neither of those are welcome realizations, though I doubt they are news to anyone with a working brain. However, for the sake of manners, I'll simply assume Mr Geithner is outright insane, in which case I am indeed, quite honored to be invited to his recovery... I only wish he'd mentioned the planet where it was taking place.

Let’s have a look at some data points on Earth, courtesy of the Bureau of Labor Statistics. 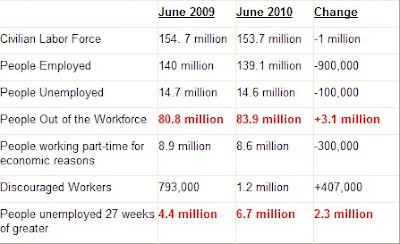 Ok, you could possibly see something along the lines of improvement if you focused solely on the number of unemployed people, which has dropped 100,000 in the last year. Moreover, the number of people working part-time for economic reasons has dropped by 300,000. That’s not bad… so we must be in a recovery right?

These are the only data points that show any improvement. To get the word “recovery” out of this, means ignoring a whole slew of data that is downright ugly including:
•The 900,000 who stopped being employed in the last year

•The 3.1 million people who somehow mysteriously vanished from the workforce but are not unemployed (?!?!)

•The 2.3 million MORE people who have been unemployed for more than 27 weeks

•The 407,000 more people who have simply given up even looking for a job because they don’t think they could find one.

Hard to find the word “recovery” from that mess. “Disaster” or “soon to be disaster when the unemployment benefits run out” seem more fitting descriptions. But then again, I am suffering the handicap of being on earth. Perhaps things are better on Mars?

It’s not as though the rest of the economic data looks much better. The following data points range from “not as bad but still bad” on the positive side to “absolutely horrendous” on the negative side. 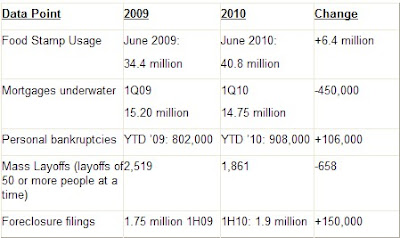 Well, the number of mortgages underwater has dropped off. That’s largely due to the fact home prices bounced a bit year over year courtesy of the tax credits. But the jump in foreclosure filings, and personal bankruptcies shows doesn’t exactly spell economic strength. As for food stamp usage… no comment needed.

I don’t know about you, but I fully intend to take Mr Geithner up on his welcome invitation to the recovery. I only wish he’d tell me what planet it’s taking place on so I can move there, cause it sure ain’t earth.

Thank you to my good friend Joe for his take on this and sending me this in an email.