It seems as if this is the first time I have had to post in 2011.  Life has been busy.
My two boys were in Japan over the holiday season for almost two weeks.  Having them back home and spending time with them again has been a great activity.  While my boys were in Japan I spent a lot of time on Skid Row in Los Angeles and over at Union Rescue Mission.  I posted a few items on those activities.
Even though things have been busy I kept uploading mobile status updates and photos to facebook and twitter.  Electronic media and social networks keep the information flowing to some degree.
There is a lot of activity at 65 Amps as they have two new amps; the London Pro and Empire.  The London Pro is the first amp in the Working Pro line, the red label series of amp designed around the working professional.  The Empire is part of the blue label series.  Since my own shop is within the 65 Amps complex I am generally aware of some of what goes on over there. 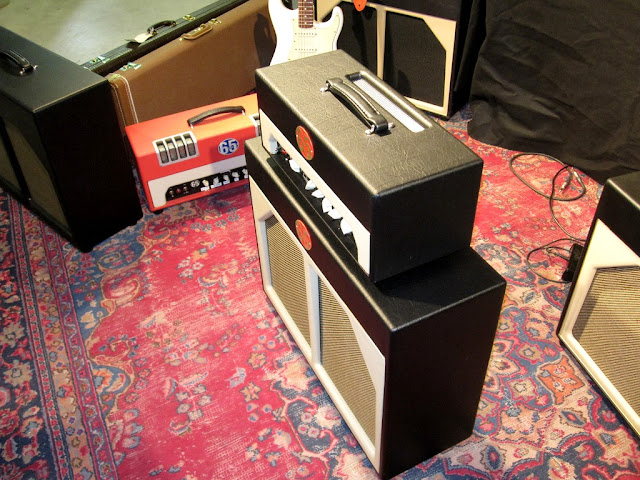 London Pro head on red label cabinet.  Empire prototype on the left in tomato colored head shell.
Both of these amps will be shown at NAMM.  Dozens of London Pro amps have been shipped in the last month.  NAMM is next week so things have been quite busy at the complex to say the least.
Posted by myles111us at Saturday, January 08, 2011 No comments: