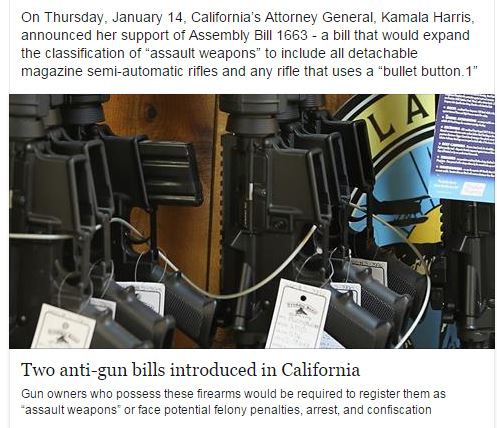 I may be be one of those Democrats which are cited as a Democrat who is in favor of "responsible" gun legislation.  When can "we" expect some?

Can any of you give a single example of how any of the current proposed legislation or current laws would have stopped any of the horrid events we have seen in the past YEARS in the news or reported in the media?

Can any of you give me an answer of how any of your legislation will stop firearms from being acquired by people who do not follow laws?

Well, the Democrats have lost me.

In regard to Assembly Bills 1663 and 1664; People in California already went through a process deemed legal at the time of purchase of these firearms.  They went through a background check, waiting period, registration process, and paid fees as noted in the graphic at the top of this piece.

To require additional fees and registration is not what I feel is "responsible legislation" on many levels, There are additional aspects to the legality, it not just the rationality, of AB 1663/1664.  What about passing property down to heirs when I pass away?  Firearms will be held to a different standard than other legally purchased items?

If I owned a classic car, the car could no longer be produced.  Yet, I could sell the car or pass it down to my children.  The car would retain full value.  This is not the case here.

Our government insists that  they are looking to enact registration and practices which do not take legally purchased property from people.  This is clearly a road which is contraindicated.

If AB 1663/1664 is passed, I hope people will not take any steps to be compliant with this law.  I hope they will be willing to be prosecuted.  I hope the National Rifle Association will have attorneys available to represent us on a case by case basis.  I also hope people bring cases into small claims court against the California Attorney General and the other individuals responsible for this bill for the loss of personal property and the value when the firearm cannot be sold, passed down to their heirs, or has lost it's value.

Looking at these two bills raises a question.  Is the object of our legislature to write the same bill multiple times with slightly different wording in the thought that one of them will go unnoticed by their constituents?  I am insulted that you feel we are all that stupid and uninformed.  Hopefully many will return the respect and sentiment when they vote.

Yes, I am a Democrat.  I have been a member of the NRA on and off.  My reason for leaving the NRA at times was that I felt that too many members made rash and emotional statements that reflected poorly on the organization.  But, even to me, this reeks of a government wanting to eliminate firearms from being in possession of anybody other than those under direct control of the government in some manner such as law enforcement and our military.

I wonder how many people realize that this could classify pistols such as the M1911 pistol (Colt Government 1911) as an "assault weapon" as well?  I am sure that the government hopes that most people don't realize this.

In the future, I intend to vote against any Democratic candidate for any position.  I always used to vote for Assemblyman Mike Gatto as I felt he was one of the "good folks".  Unfortunately, I will not feel comfortable doing that in the future as I will now see him as somebody that belongs to a bad organization.

I attempted to write each of you from your online contact website but was not allowed to do so as you are not in my district.  Considering that the actions you have taken impact people outside of your district, I find this highly irresponsible.  I tried to call numbers on your websites, including you Kamala Harris, and was received by automated phone systems that give lists of other departments or numbers to call.  In the case of Philip Y. Ting. his numbers did not work, he does not have a Facebook page as other noted in this piece, and for a public official, is anything but accessible.