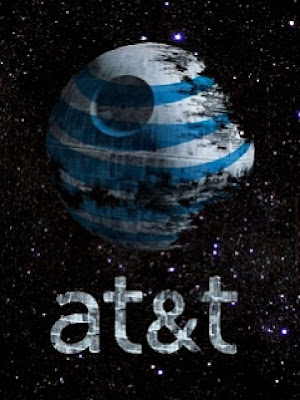 There are two main pieces I wrote and continue to update on ATT.  This is the second ongoing piece.

You can read the original companion piece  (which is updated often as is this piece) at
http://la-economy.blogspot.com/2010/11/at-so-wrong-is-every-way.html


The original piece at the above link are some of my own ATT issues which started in November of 2010.

The focus of the piece is multi-faceted and includes my own service problems on a variety of problems, customer service ineffectiveness, policy changes by ATT which announce limited service at increased costs, Uverse changes, DSL policy changes, service interruptions and more.

This piece takes more of a focus on ATT buying up the competition and reducing service, raising prices and changing contracts.

I am surprised that any corporation such as Netflix, Hulu, Skype, World of Warcraft or any folks whose business is any sort of online gaming, video streaming, music streaming or our government would allow ATT to change their original agreement for unlimited data for what is in essence, the world.

As our economy is trying to climb out of the abyss I cannot believe that our government is allowing ATT to buy up competition to raise prices and reduce services.  It is the job of ATT to grow their network, not to take away service, raise prices and eliminate competitors buy buying them.

Shame on ATT.  Shame on our Government for allowing one of the few places business is growing in this economy (Internet based businesses) to be smacked down by ATT with their newly implemented data caps.  These caps impact their DSL services, Uverse services and cell based services.

ATT - some news on Sam Brownback, Governor of Kansas.   ATT is the second largest contributor to Govenor Sam Brownback's campaign.  ATT is also moving to Kansas.  Makes you think?  Our government is watching out for us?  Yeah, right.

Some folks might ask me; if the service is so bad why not switch?  Well, as the old phrase goes, evil can only take hold when good men do nothing.  In reality, I can only be a direct observer if I continue to be a customer.  I have met a few good people at ATT over the course of my ongoing journey and hope that they can influence the direction of a company which was once a company in America where our country had pride.  Unfortunately this is not the case today.  Survey after survey rank ATT customer service as the worst in any industry.  At the height of the BP oil disaster the perceived service view of many might have been that BP retained a better customer service image than ATT.

Click on "read more" for the entire ongoing story.