Last night Andy Bales, a past Mayor of Los Angeles, Dan Portnoy and others spent the night on Skid Row.  Andy Bales is the CEO of Union Rescue Mission.  ( http://www.urm.org/ )

Below I have compiled some of the photos and comments that Andy sent during the evening. 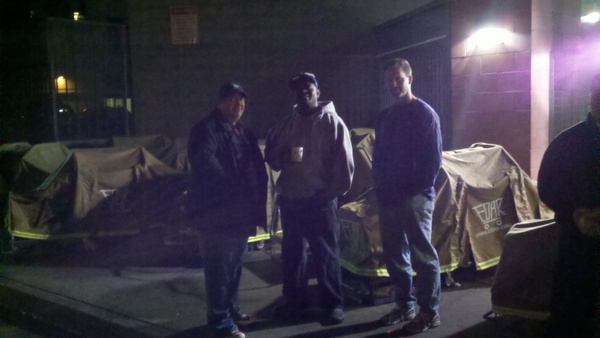 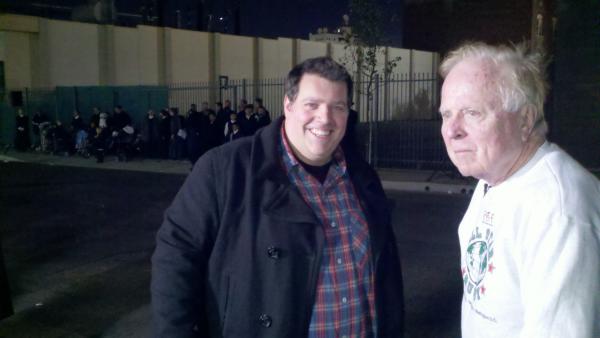 Spending night on Skid Row with Mayor Richard Riordan & @danportnoy & @petersamuelson
CBS (2) news and KCAL news (9) did a story on the news last night.
Dan Portnoy commented - Look for my mug tonight on KCAL9 and CBS2 at 11 with @abales, former mayor riordan and the crew from http://www.edar.org/

Peter Saumelson is the inventor of the EDAR.

First photo above at the top of this post; Andy Bales:  Our 'village' of EDAR.org 's on San Julian, roughest street on LA's SKID ROW.

We gave up several EDAR.org 's to senior ladies coughing & trying 2 sleep on cold sidewalk. How could we not?

We've only been cussed out a few times and nearly all have been extremely thankful & kind.

We've been trying to take a picture of the huge rats, but they are too fast!

We were hungry & @petersamuelson bought us my recession special, McDoubles & diet cokes. We gave some 2 senior ladies & gang members.

All violence & gang members have moved away. That is what happens when strong kind people occupy space keep an eye out for others. 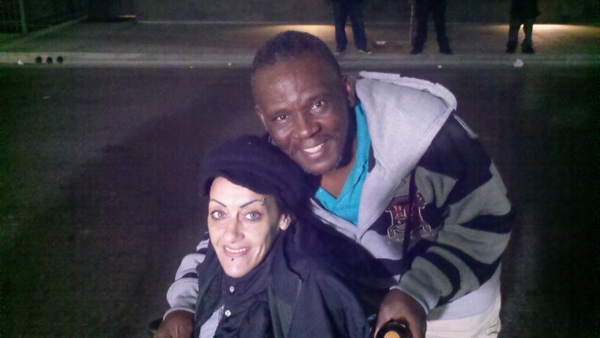 Pamela & Bernard were very thankful for the EDAR.that we gave them & they could quit walking all night.
Man verbally attacked & made racist statements. We understood,let him talk. He's atheist because as kid he feels prayers were unheard.

He ended up apologizing, shook hands, & we thanked him. He talked for nearly an hour. He's bright & frustrated with 20 yrs without home. 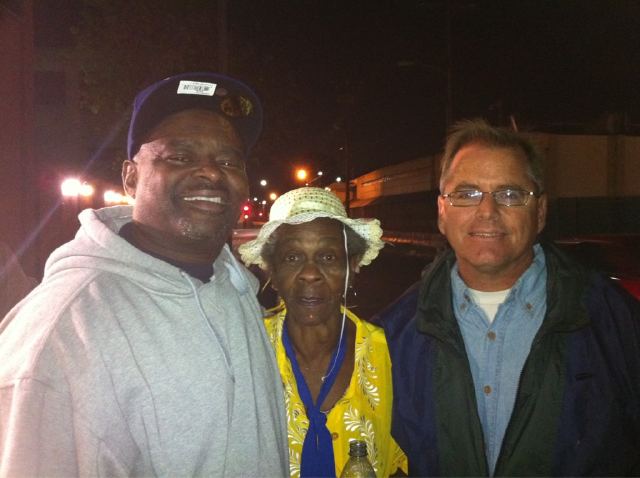 Foster grandma to 12 kids and now on skid row 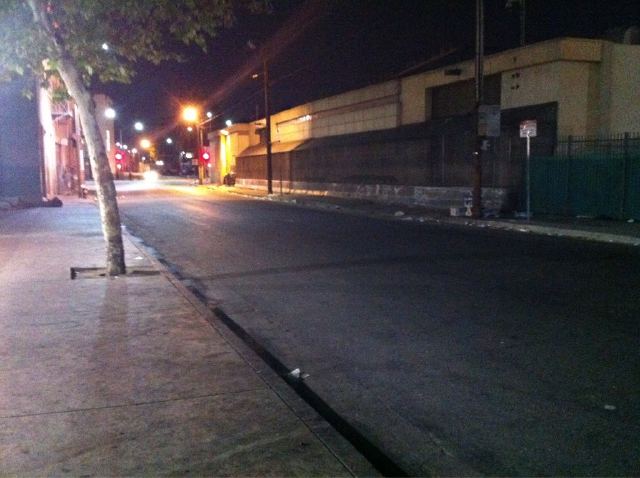 I've never seen it so clean and quiet on San Julian. Maybe our presence and a sr ladies made a huge difference
Here's the KCAL Thanks @foxlaamymurphy for covering the #EDAR sleep-out at @urm with @abales and friends! - The link to the story is here: 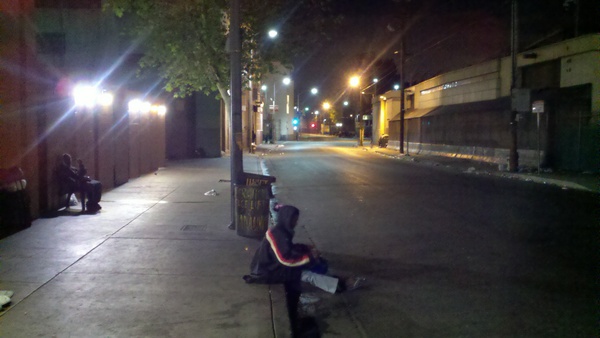 Never have seen San Julian on Skid Row LA so quiet. Hard working senior lady in picture has done all the cleaning.
2 members of a gang selling drugs just chased a man down 5th street but he was too fast. We alerted LAPD. 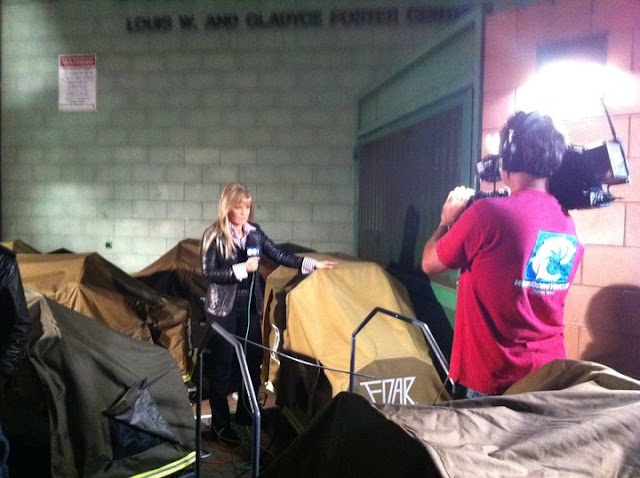 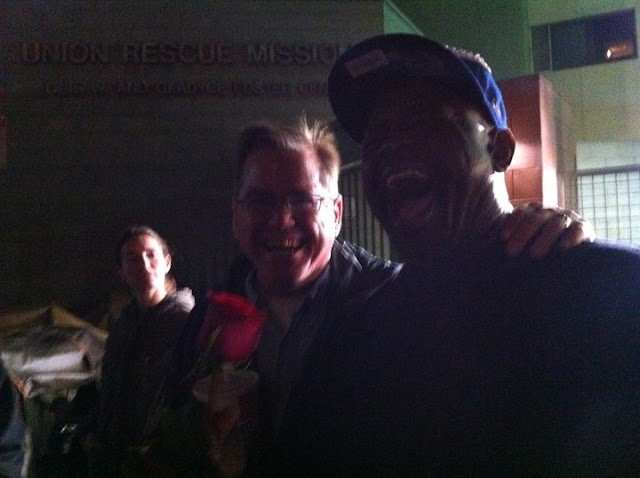 Sugarbear and Andy Bales outside URM by Dan Portnoy 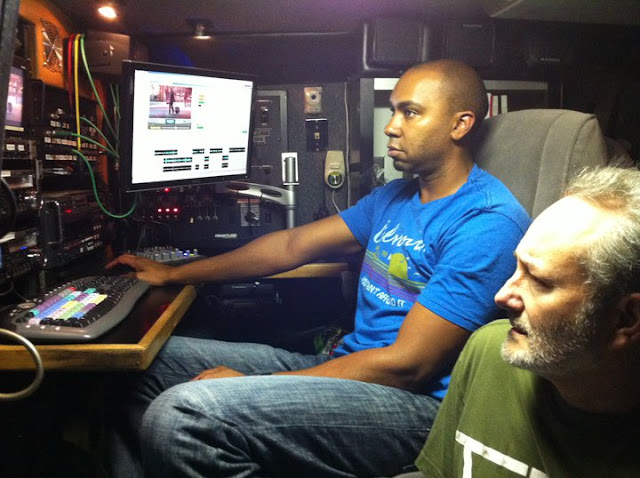 Inside the KCAL9 truck watching the feed with Peter Samuelson - Dan Portnoy shot.
My final comment is from my friend Don Garza:


Andy Bales is living on the sidewalks of skid row this morning... the most dangerous time to be out ,,, the beginning of the end of the first of the month,, right when folks get their food stamps and sell them for their last effort to buy their drug of choice.. dealers out in full force disguised as homeless..or homeless running for them.
The streets of skid row are always a tough place to be.  The holiday season is an even more difficult time of year.  If you would like to help my friends and I sponsor a table at Union Rescue Mission to provide a full Thanksgiving dinner to folks please take a look at my blog post at:


http://la-economy.blogspot.com/2010/11/help-me-provide-thanksgiving-meals-at.html
Please feel free to pass along the link to others.
Myles Rose is the founder of ﻿Guitar Amplifier Blueprinting which provides support services and training for touring bands and individuals as well as blueprinting services.   I offer consulting services to various amplifier designers and manufacturers.  The link www.guitaramplifierblueprinting.com has links to music industry forums which I moderate and direct email contact information.  My shop is located in the complex at www.65amps.com.  If you wish a tour of 65 Amps please feel free to contact me directly.  When I am not doing something related to music I do what I can to support the homeless of Los Angeles either directly on the streets at night or through my good friends at Union Rescue Mission.