The homeless, the economy, food, photos, meetings and escorts

The last week or so has been somewhat busy.  I don't know where to start so I will just start with today and work my way backwards I suppose.

Today the stock market was up 103 points.  Looking into my crystal ball .... the market was up today and had a large upward trend. My thought is that tomorrow or Friday, or possibly both days will be down days as profit taking and automated computer trading programs kick off for the end of the week and/or triggered by the upswing of the day.  I would venture to guess that there will be news stories making statements of an economy turn around sign even though the unemployment numbers increase (even though when they do not rise as fast the government paints a rosy picture) and the number of homeless on the streets of Los Angeles rise from week to week.

Over on my facebook wall I posted this:  Take a moment to consider helping in any way possible to the folks out there trying to help the less fortunate - Union Rescue Mission, The Midnight Mission or one of the others of your choice. I have the links below in other posts if you wish to learn more about what these folks do.

If you want to find these folks easily ....  http://www.urm.org/ and http://www.midnightmission.org/ are their respective links.

I spent a bit of time at Norm's Rare Guitars in Tarzana California one day.  Norm is a big supporter of The Midnight Mission with concert events, donated guitars for sale to raise money for the Midnight Mission folks and is a terrific fellow. 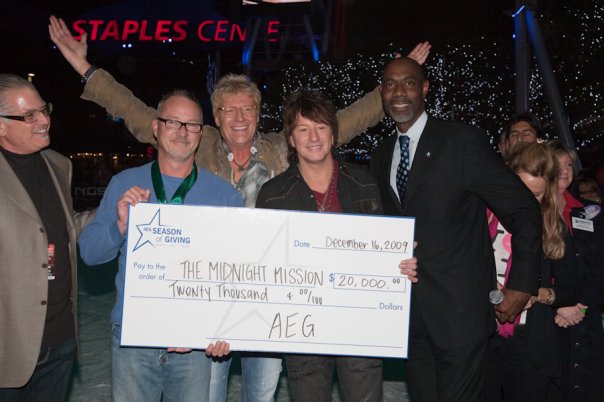 Tomorrow I have a meeting with the folks at Union Rescue Mission ( http://www.urm.org/ ).  I may take some facility photos to post at a later date.  Andy Bales is the CEO of URM and many of you already know how I feel about URM and the staff there ... first rate folks.

I keep stretching my time continually but it seems to be working.  I spend time at 65 Amps, spend at least half my evenings on the streets of downtown Los Angeles passing out snacks to the street residents who do not go to the missions for whatever reasons they may have (I cannot seem to understand the reasons myself), taking photos of the downtown architecture and events of downtown and whatever else I can fit in.

This is home for many on the streets of skid row or elsewhere in Los Angeles
When I feel I am running out of time I think of folks like Andy Bales and Larry Adamson and how much they accomplish in a day.  At that point I feel like a lightweight but at least I am inspired to push things a little further.

I wrote two reviews on Yelp on a few spots where I ate in the last few days.  One was a Korean place and the other an Italian spot downtown.

The Italian spot was payment for doing a bit of photography work for two gals that live downtown and needed some photos for their webpages on an escort site.  I don't ask questions and I do not judge people in this economy.  For me it was a dinner that was compensated at a nice place.

Jeff Beck will be playing April 17, 2010 at 8 pm. The Midnight Mission states:  We have Pit, Row K and Row W tickets available. All come with a pass to the VIP Lounge. Our friend Norm at Norm's Rare Guitars donated them to us to auction on Ebay. Check it out on our website. It promises to be a great show!

I took this photo with my cell phone one day and posted it on Facebook.
Some folks liked the picture.  I liked the building.  Some folks commented on the photo and said nice things.
I went to visit Don Garza but missed him.  But ... I took a cell phone shot going up the escalator at Pershing Square.

Sort of added an artistic touch to the cell phone photo.
I commented on a few new stories that I could not wrap my head around.  One story was about Tiger Woods.  Tiger Woods says missing son's birthday 'something I probably will regret for the rest of my life'  The story can probably still be seen here:  http://latimesblogs.latimes.com/sports_blog/2010/04/tiger-woods-masters-news-conference-son-birthday-regrets.html
My own comment on this story at the time:  GIVE ME A BREAK! How many men and women are in the Mid East serving their country who are missing births, first steps, first words, birthdays etc. etc. etc. I cannot believe tripe like this makes news.
I sent 11 quads of EL84 tubes to Chad Weaver (Brad Paisley).  That should keep things going for a while.
I connected with a few old friends on Facebook which is always nice.
I will wrap things up for now and head downtown in a bit but before I end things here is the latest video from the folks at Union Rescue Mission -

Happy Wednesday and have a great remainder of the week.
Myles
Posted by myles111us at Wednesday, April 14, 2010 No comments: